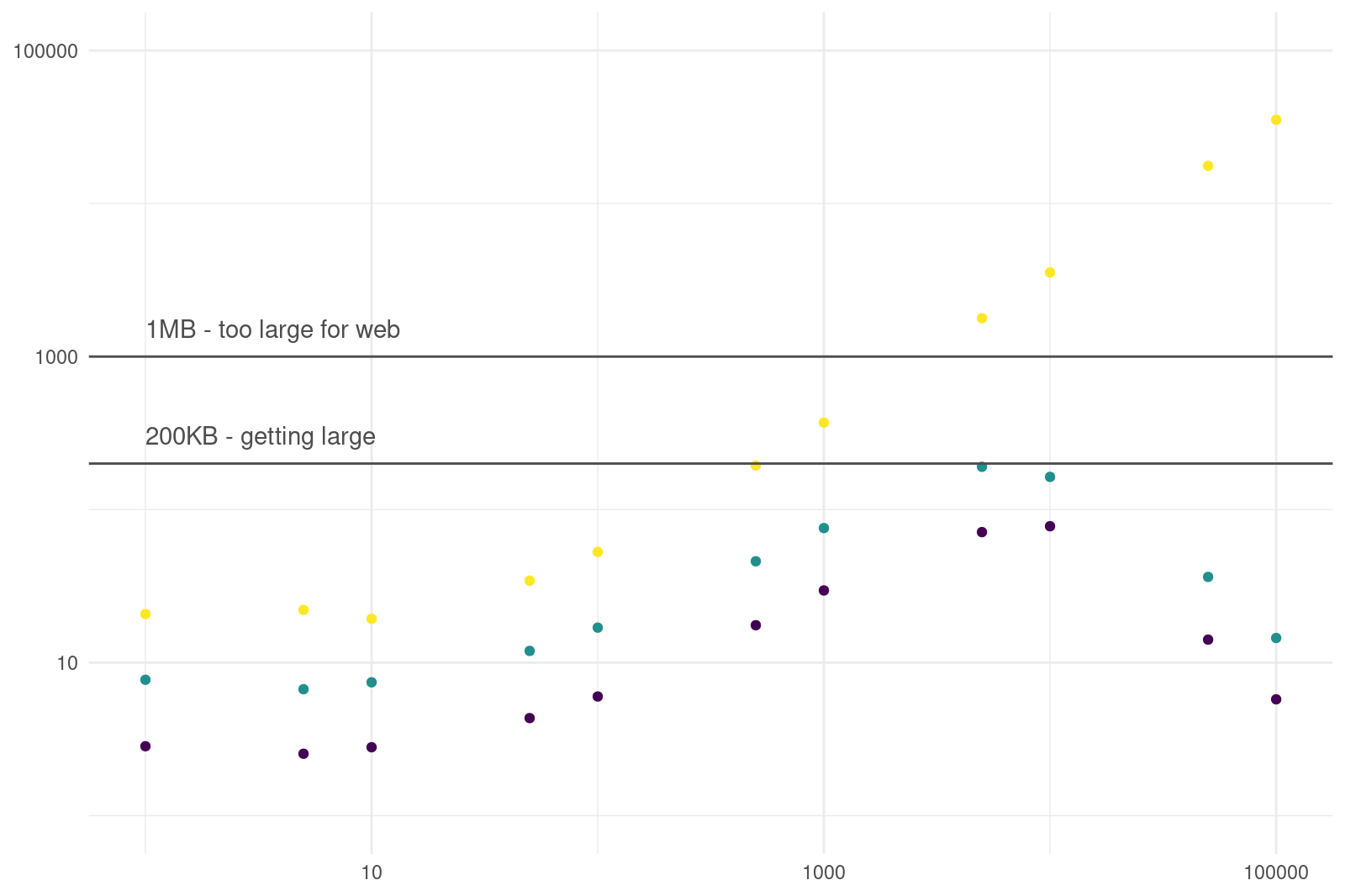 This is part two of our four part series

There are (at least) three file formats to choose from: JPEG, PNG and SVG.

If you are reading this via a syndication site, be sure to go the original post for updated links.

As the JPEG compression algorithm significantly reduces file size, JPEG files are ubiquitous across the web. If you take a photo on your camera, it’s almost certainly using a JPEG storage format. Historically the file extension was .jpg as Microsoft Windows only handled three character file extensions (also .htm vs .html). But today both extensions are used (personally I prefer .jpeg, but I’m not very consistent if I’m totally honest).

If you did a little Googling on which file format to use for images, then the answer you would come across is that JPEG’s are the default choice. But remember, figures are different from standard images! R figures have text, straight lines, lots of white space, and perhaps transparency.

So in general don’t use JPEGs. The only exception might be when you have a “photograph-type” plot, such as a detailed contour or heatmap. You would only consider this, however, if the file size of the PNG was large.

Do you use RStudio Pro? If so, checkout out our managed RStudio services

A Portable Network Graphics file (PNG) is a raster file format that uses lossless compression. It was originally created as a replacement for the GIF, but unlike GIFs, PNG files don’t support animations.

While the PNGs file size is a little larger than JPEGs, it is usually the better default option. For a nicer, smoother image, you should use type = "cairo-png" when creating a png.

The size of a PNG can often be reduced using the optipng utility. For graphs, a reduction of around 50% isn’t unusual. Running optipng takes around one to two seconds per image, so isn’t really suitable for dynamic, i.e. Shiny based applications. However, for generating images that will never change, e.g. blog posts, then an extra second or two is not an issue.

If you’ve already created a bunch of images, then a simple R script can easily optimise all files

The optipng function has a compression argument, that allows you to improve the PNG compression, e.g.

The argument -o selects the level of compression. The higher the number, the hard optipng tries to compress. To be honest, I’ve found leaving the compression level at the default level to be more than significant. Life is too short to worry about the odd byte.

A Scalable Vector Graphics file (SVG) uses an XML-based format to precisely describe how the image should appear. Since the graph is described using text, an SVG can be scaled to different sizes without losing quality, i.e. we no longer worry about resolution.

This format is particularly appealing for figures, which are simply a combination of lines, texts and shapes. The downside is that file sizes can get prohibitively large. For example, if you have a scatter plot with lots of points, each individual point will have it’s own entry in the SVG file.

To understand the trades a bit more, lets create multiple {ggplot2} scatter plots where were gradually increase the number points

The first scatter plot (when i = 1) only contains a single point, whereas the final scatter plot contains i = 100000 points, and is almost entirely black with points. For each scatter plot, we generated

If you’ve ever used Google’s PageSpeed Insights, one of the recommendations is to serve images in next-gen formats, such as JPEG 2000, JPEG XR, and WebP. However, a little investigation suggests this is overkill for the vast majority of sites. As a significant numbers of browsers don’t yet support these formats, shaving off a few bytes doesn’t seem worth the effort. Obviously if you have a top 100 site like Amazon or are serving lots of images on a page, then it may/will be worth the hassle. For most sites using Hugo, shaving milliseconds off load time isn’t required.

Typically, I don’t care about optimising to the nearest byte, but a combination of choosing the correct dimensions and the correct image type, gives you something close to optimal with little thought.